For years, we have been reading the promise of paper-white electronic displays, a future of books and newspapers with ink-on-paper readability delivered on super-thin LCD displays. For the tree-huggers among us, the ultimate eBook technology may remain a distant promise, but at least one company is making a practical step toward commercializing white-background LCDs.

At DEMO in Phoenix, we previewed a white Apple iPod retrofitted with an NTERA NanoChromatics display, and the result was no less than stunning. They say that "white is the new black," due in large part to the success of the iPod, and NTERA takes Apple's design brilliance to a new level. According to company President, Nick How, "working at the molecular level using nanotechnology design allows NanoChromatic pixels to be changed individually without refreshing the whole screen, which decreases the power consumption dramatically." Add to this the fact that white-background displays have four times the contrast ratio and do not usually need a backlight, and the power consumption is much lower than current LCD technology. Most importantly, these LCDs can be built in the same or smaller footprint and manufactured in the same factories as today's LCDs. Even though NanoChromatic LCDs are a bit costlier to build, the final product is comparable in cost to the 30 year-old gray LCD with a backlight, and significantly less expensive than the new OLED technology. 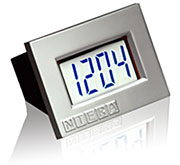 Also, one charged, the pixels remain black until actively bleached, which means that these displays remain stable over a period of several hours even when turned off. For displays that do not change frequently, this suggests even-lower power consumption than has been previously imagined. In the near future, we hope to see a lot of white LCD text and numeric displays, most likely in white kitchen appliances, thermostats, automotive display consoles, and the myriad of atomic clocks produced by companies like Oregon Scientific, and hopefully the folks at Apple will soon get excited about the new cosmetic possibilities for their category-shattering iPod.

What didn't we love about the NanoChromatic display? Although we were only looking at prototypes and reference designs, we noticed some speed problems in refreshing the display, and on the large displays, the middle of large black areas were not as dark as we had hoped. All previous attempts at white-background displays seem to be plagued by these same problems, and the folks at NTERA assured us that their technology is better at resolving this than any other solution, although apparently not perfect. Also missing was the hoped-for shades of gray. With such incredible contrast ratios, we thought that these displays might finally offer real shading, but I think we were hoping for too much.

For more information on this product visit www.ntera.com