The most mesmerizing Las Vegas supershow in isn't in Las Vegas at all, at least not yet... Yes, we are speaking of Cavalia, the equestrine version of Cirque du Soleil, which has had a long and sucessful run touring North America under what they claim is the the largest touring tent in this hemisphere.  We have had the opportunity to review Cavalia twice and like a good mystery novel, it's even better the second time. 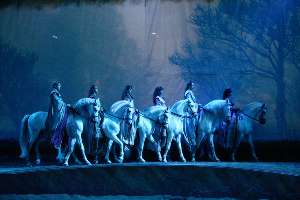 Created by Normand Latourelle, one of the pioneers of Quebec’s famed Cirque du Soleil, and directed by Érick Villeneuve, Cavalia is a grand-scale spectacle involving equestrian art, acrobatics, music, projected images and more than 70 performers, including a troupe of dozens of magnificent horses.

With hundreds of performances to date since the 2003 debut in Canada, Cavalia glistens with refinement. Infused with live music and vocals, the show is more vibrant than ever with awe-inspiring multimedia projections, stunning special effects, and entrancing costumes. 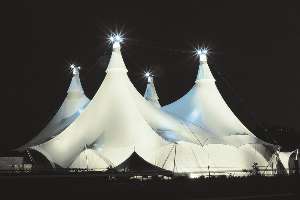 The New York Times called the show “A celebration of the unique-emotional and physical bonds between humans and the animals.” The Los Angeles Times described Cavalia a “Blissful play, haunting score… striking aerial grace. The impression is one of intense bond between horses and man.”

And the Gadget Gals? Well, frankly, we're still speechless, as we rub our eyes and look at each other and wonder if we are waking from a dream. Cavalia is beautiful, graceful, powerful, and haunting.

There are several different ways to see Cavalia. Tickets range in price from $49 to $175, or about half that for children. Higher-priced tickets will get you access to the VIP tents, plus a backstage tour and an opportunity to interact with the performers (horse and men). 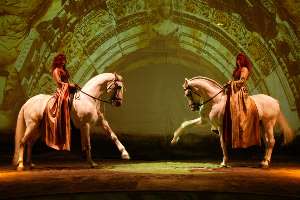 Cavalia is not so much about horseback "riding" or even horsemanship as it is about a heartfelt relationship between horse and man. In fact, many of the most beautiful scenes and sequences are about horses and their two-footed companions in play, both with their feet on the ground.

UPDATE 2009: I had the pleasure of taking my neice to see Cavalia in Feb 2009; she described her experience in an email to me:  "The bottom line for me is, Cavalia and Cirque du Soleil are not as alike as they may seem. Cirque du Soleil transports the audience to another world, an ethereal realm of strange creatures and magic; whereas Cavalia presents the audience with an earthy and artistic portrayal of the close bond between man and horse, which is magic of a different kind. It is clear that the human performers love their four-legged counterparts as much as they love to entertain, which they do with unbridled enthusiasm. Horse lovers are guaranteed to love Cavalia the moment they sit down."